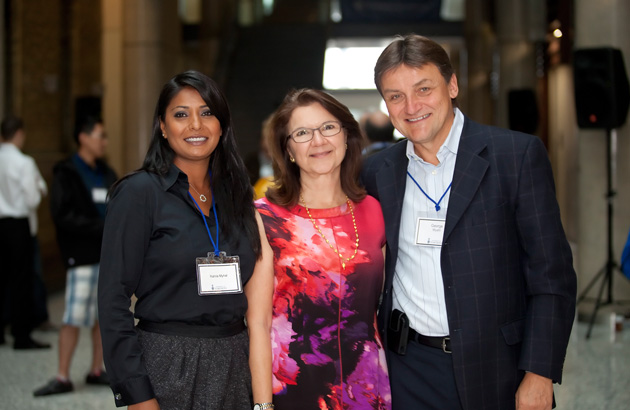 Chair of its Campaign Executive Committee, Myhal is among the first to support the Centre for Engineering Innovation and Entrepreneurship, the centrepiece of the campaign for the Faculty of Applied Science & Engineering.  He is one of four key donors who have directed their support to the new Centre.

The Centre for Engineering Innovation and Entrepreneurship will be located on St. George Street next to Simcoe Hall and is destined to be a landmark building at U of T.  It will feature dynamic, flexible environments that break down artificial barriers between people, foster collaboration, encourage active learning and accelerate innovation. Some of the Faculty’s most innovative institutes and centres will be housed in the new building, along with state-of-the-art facilities that promote group work and research.  The future Centre has also received generous early support from Bill and Kathleen Troost, Peter Allen and Paul Cadario.

Though Myhal is taken by the spirit of innovation and collaboration the Centre embodies, he also sees it as an important part of the needed improvements to campus infrastructure. “When I was at U of T Engineering, some of the buildings we studied in were old and creaky,” he jokes. “So, I know the value of great infrastructure. The buildings the students have now, like the Lassonde Building, are a sea change compared to what I had. We need more buildings like that.”

George Myhal has a long volunteer association with the wider University of Toronto community, including an almost decade-long membership on Governing Council, and roles as Vice-Chair and Chair of the Audit Committee.  He was also member of the Great Minds campaign cabinet and is currently a member of the Boundless Campaign Executive.

In 1958, Myhal arrived in Canada with his family from the western Ukraine, accompanying his machinist father and his mother, a nurse. Inheriting his father’s aptitude for mechanics, Myhal studied industrial engineering at U of T and then built a career in finance. Today he is Chief Operating Officer at Brookfield Asset Management.

He credits his success in part to the educational opportunities afforded him after his family immigrated to Canada.  To this day, it’s something he remains thankful for and, when he thought about the best way he could give back to say thank-you for these opportunities, it seemed natural for him to choose U of T Engineering. “I believe it offers an outstanding education,” he says.

Myhal would also like to see the Faculty increase its community outreach. “We need to have a more robust conversation with businesses and with alumni,” he says. “It will make students’ education even more relevant and valuable.” For Myhal, that relevance has never been more important. “Given changes to technology and its impact on our lives, engineering will have a higher profile and more importance in the world than when I was a student. It’s important for the Faculty to play a part in this new era for engineering.”