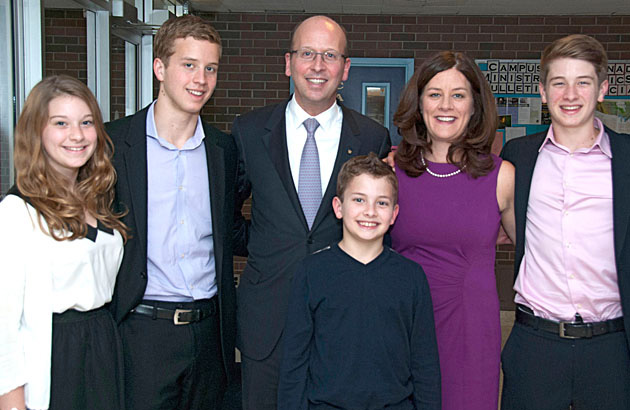 The gift will be matched by the University of Toronto to create a fund of $1 million.

“It’s a program that helps students reach out,” Dodig says of SMC One: Cornerstone. “It recognizes that the academic institution is a living organism within the community.”

A Bachelor of Commerce graduate, Dodig holds a MBA from Harvard, where he was elected a Baker Scholar, as well as a Diploma in Business and Government from the Institut d’Etudes Politiques (Sciences Po) in Paris. He is now Senior Executive Vice President and Group Head of Wealth Management for the Canadian Imperial Bank of Commerce.

Dodig has a long and distinguished record of voluntary service to both SMC and U of T. He currently serves St. Michael’s College in several areas, including as a member of the Collegium, Chair of the Investment Committee, Chair of the New Millennium Golf Classic Tournament and as an advisor to the Boundless Community Campaign.

Even as an undergraduate, Dodig was an active volunteer, serving as a member of the St. Michael’s College Student Union (SMCSU) and the Governing Council of U of T. He was also one of the founders of the U of T Marketing Club.

“I had a great experience,” Dodig says of his undergraduate years. “I liked the campus, I liked the friends that I met. I liked the multi-college structure.”

Dodig showed his gratitude early, making a gift of $100 to SMC in 1993, while he was still a graduate student at Harvard.

“I always saw what I received at U of T as something that greatly benefitted me personally,” Dodig says. “It was important for me to give back, because the economics of the tuition (in Canada) were quite low.

“When I look at some of the alternatives outside of our country, and the United States in particular, the whole notion of giving from graduation onward is one that every Canadian needs to embrace. It doesn’t need to be a big gift. It could be $10 a month. But that notion of giving back is incredibly important to the viability of our post-secondary institutions.”

The $500,000 pledge by Dodig and his family (his Harvard-educated wife Maureen and their four children Matthew, Thomas, Julia and Nicholas) is directed toward a program that has the notion of service at its core. SMC One: Cornerstone will provide first-year students with an engaging, small-group learning experience and a curriculum that links academic skills to service in the community.

“You get to reach out to nonprofits,” Dodig says of the program. “You can benefit from their expertise and at the same time recognize the importance of giving and learning outside the academic environment. I believe this will give students relevant experience for their own careers, regardless of what path they choose.”

The Dodig gift was announced at a reception on April 16 attended by Dodig’s parents, Veselko (Bill) and Janja, who are natives of Croatia. Also among the guests was the Honourable Michael H. Wilson, Chancellor of the University of Toronto and a friend of Dodig.

“U of T is one of the finest institutions in the world. We need to make sure it stays that way.”