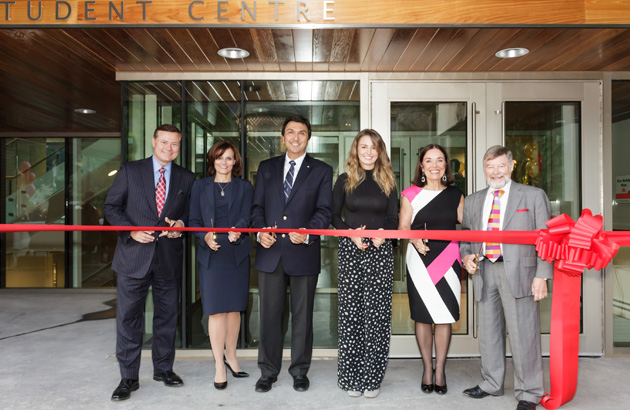 Named in honour of the Goldring family (siblings Judy and Blake are both Vic alumni), support for the Centre was initiated by the late Warren Goldring, a U of T philanthropist, volunteer and alumnus. The new Goldring Student Centre both preserves and expands the original Wymilwood student union, a historically listed building that was designed by former U of T Architecture dean Eric Arthur more than 60 years ago.  The Centre opened officially with a ribbon-cutting ceremony on Sept. 25.

“This splendid lead gift from the Goldring family inspired a major contribution from our students, and with their assistance and the generosity of others, especially our chancellor, we now have a wonderful place that encourages all those activities and interactions that make up a well-rounded education,” said Paul Gooch, President of Victoria University. “We’re truly, deeply grateful.”

One highlight of the Centre is the sun-drenched two-storey Wendy Marion Cecil Atrium overlooking the quad. This space was made possible through a gift of $1 million from Cecil, Chancellor of Victoria University, and is one of the many features that pays special attention to the relationship between open space and buildings that characterize Victoria University.

The Toronto-based architectural firm Moriyama & Teshima preserved many of the iconic heritage features of Wymilwood within the new building.  Another key element of the project, for example, was the closing of a driveway to create a sloped garden and quad between the student union and Margaret Addison Hall, where the turrets of nearby Annesley Hall are also visible. With 40,000 square feet of interior space, the Goldring Student Centre brings together 20 Vic student societies, including the Victoria College Students’ Administrative Council and Strand newspaper.

“Before the Goldring Student Centre, student clubs and groups were spread out all over campus, says Victoria College Athletic Association president Nirusha Shanmuganathan. “Now that we are all sharing a space, we feel like a stronger community.”

There are study spaces, a meeting room and a music room on the upper level. Downstairs is home to Ned’s café and the distinctive Wymilwood circular staircase has been preserved.

The completion of the Centre was very much a joint effort, led by a $4-million donation from the Goldrings. Victoria College students committed $7 million and alumni have contributed almost $9 million to the project.