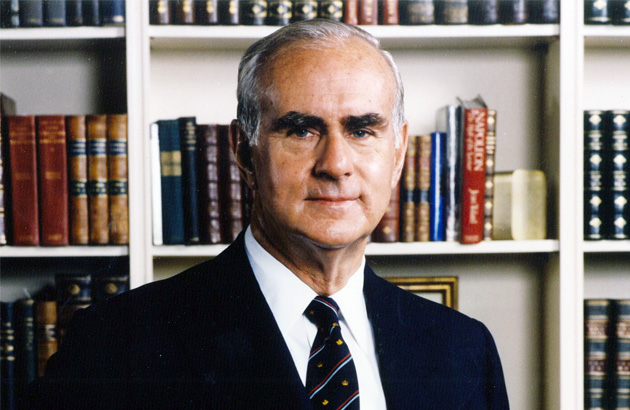 As Dean Mayo Moran describes it, the Honourable Henry N.R. Jackman’s newest $10-million benefaction will help construct a building to “make the spirit soar” – for students and faculty now, and for generations to come.  Dean Moran announced on October 1st that Dr. Jackman’s gift to the Faculty of Law will help build a new $54-million facility on the south side of the law school.   This gift is in addition to the $1 million Dr. Jackman gave last November to the faculty’s capital campaign.  Construction on the new building will begin in the summer of 2013.

“Graduates from a law school as distinguished as U of T’s can have a profound impact on the future direction of our country,” said Chancellor Emeritus Jackman, a former Lieutenant-Governor of Ontario. “I’m delighted to participate in a campaign for a building that will enhance the student experience and be part of a magnificent landscape in the heart of our great city.”

Designed by the Toronto firm Hariri Pontarini, the new multi-storey wing on Queen’s Park Crescent will be named the Jackman Law Building.  Additionally, Dr. Jackman’s previous $1-million gift, which he made to the Faculty last November, will see a lecture hall in the new building named after jurists Richard Haldane and William Watson.  Jackman admires their early twentieth-century work in articulating the divisional powers between the federal and provincial governments under the Canadian Constitution.

Dean Moran praised Jackman as “one of the Faculty’s most distinguished alumni, and we are very proud that our new building will bear his name. He represents so many of the qualities that the Faculty hopes to instil in its students: a deep intellectual engagement with the law, a passion for excellence and an unwavering commitment to the public good. His generosity will transform our great law school and ensure that we continue to offer the best legal education in the world, right here in Canada.”

Dr. Jackman, Chancellor of U of T between 1997 and 2003, has had a long history of giving to the University.  Perhaps the country’s greatest champion of the humanities, since 2002 he has committed over $30 million to help establish the Jackman Humanities Building and Jackman Humanities Institute.  With internal matching and other funds, his gift helped catalyze more than $90 million in support of U of T’s humanities departments, and has vaulted the University into the top ranks of humanities centres worldwide.  In the context of this support, Dr. Jackman has said that the humanities are “particularly close to my heart. I can’t imagine a university without these areas of study – the heart, root and historical basis of any great university.”

Dr. Jackman’s total support represents the largest gift to the humanities from an individual ever made to a Canadian university, and his latest gift to the Faculty of Law brings his total giving to the University to more than $44 million.

The new state-of-the-art building will enable the law school to continue competing for top students and world-renowned faculty. New classrooms will permit a wider range of course offerings and more dynamic interaction between students and professors, enhance faculty research synergies and provide deeper professional and community engagement. The renovated Bora Laskin Law Library will include upgraded technology and research tools, quiet areas for reading and research and group study rooms.

The new building will increase space at the faculty by 50 per cent, and the expanded facilities will add much-needed contemporary teaching, learning, research and collaborative space not only for JD and graduate programs, but also for professional and continuing education courses.  It will also host ground-breaking new initiatives such as the global professional LLM and internationally trained lawyers program.

Other parts of the Faculty’s overall capital plan include an extensive interior renovation to the Bora Laskin Law Library and a light renovation to historic Flavelle House.  The campaign has received tremendous support from the University, as well as from Faculty of Law alumni and friends.  The law firm community has provided outstanding support, with $2-million gifts from Osler, Hoskin and Harcourt LLP and Torys LLP setting new benchmarks for law firm giving in Canada.

Hal Jackman (BA, Victoria College, 1953, LLB, 1956) is among the most engaged volunteers and generous donors at the University of Toronto.  He is an Advisor to the Faculty of Law Building campaign cabinet and an Honorary Chair of the University of Toronto’s Boundless campaign.  He has been a vigorous supporter of the Faculty of Law and its leadership, saying “I’m a big admirer of Dean Moran. I think she’s taking things in the right direction.”

Dean Moran said in the early stages of planning the new premises that some buildings can “make the spirit suffer” or “make the spirit soar” and that it was important for an educational institution such as U of T to achieve the latter.