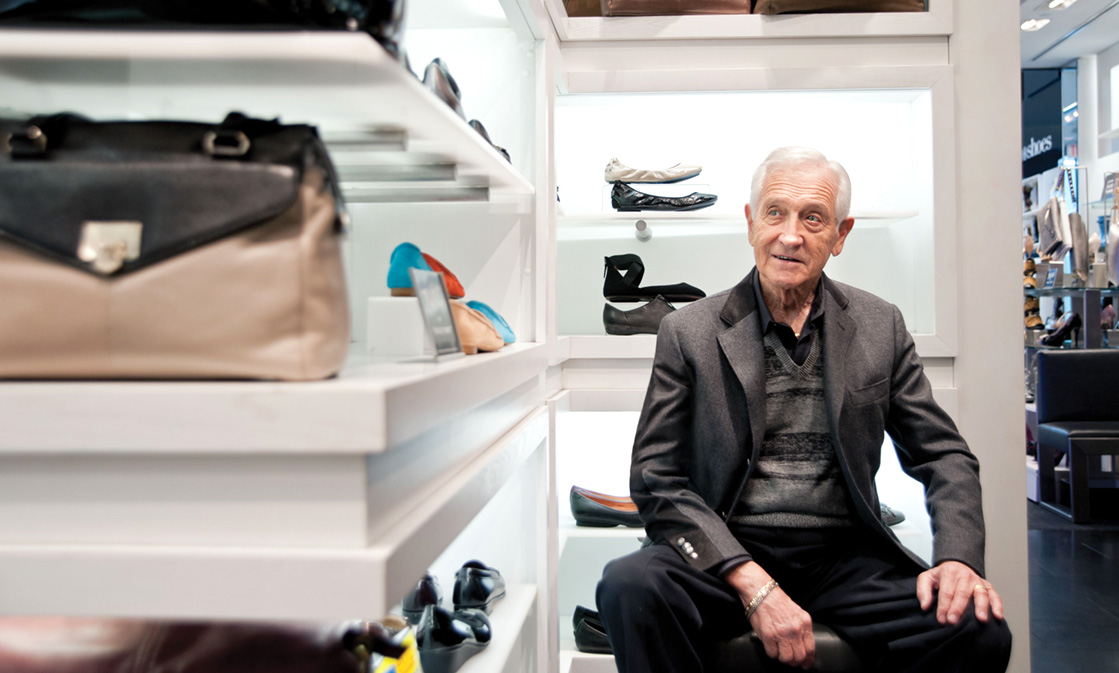 Learning from the best: the double rewards of mentoring

Learning from the best: the double rewards of mentoring

Leonard Simpson (BA 1950 UC) was just out of university when his father put him in charge of three of the family’s retail shoe stores. The stores were underperforming and Simpson, just 22 years old, made a bold decision. He sold two of them and invested heavily in the third. Eventually he grew the business into Canada’s largest branded shoe retailer, Town Shoes.

Simpson used his decades of business experience to mentor students from the departments of economics, political science and commerce.

“My style works best with having a few students at a time,” says Simpson. “But I make sure to help each one on an individual basis.”

One of his first mentees, Alexander Comeau, 24, earned a master’s in economics and was excited to have an opportunity to receive Simpson’s guidance. “I wouldn’t have had access to someone with Leonard’s depth and breadth of experience, professionally and personally, had it not been for this program,” he says. “I looked at the relationship as a great complement to my academic studies because of our shared interest in wealth management.”

Comeau was eyeing a career as an investment portfolio manager. Simpson, having sold his retail shoe businesses in 2012, invested the proceeds through Westcourt Capital Corporation, an investment management boutique. He and his son, Alan, play an active role in the allocation of their assets.

He inspired and motivated me

Simpson had four group meetings with his mentees, including an introductory brunch. The discussions, however, were not about wealth management or retail theory but rather the personal traits and key decisions that enabled Simpson to succeed in business and in life.

“I talked to them about focus, about momentum and about renewal,” says Simpson. “These are the three aspects I went through in my business, and that most companies go through as they mature.”

Simpson discussed the challenges he faced when his father gave him the three underperforming shoe stores to manage at age 22. “His emphasis was on staying focused, working hard and surrounding himself with people who share his ambitions,” says Comeau. “He inspired and motivated me.”

The mentorship had another benefit for Comeau–the comfort level he gained by talking with Simpson and meeting the Westcourt money managers. “It gave me good insight into the culture and terminology of the industry. It was a huge confidence booster in learning how to present myself,” he recalls.

When Comeau began his post-graduation job search, he emailed financial professionals asking for informational interviews and “to pick their brains about their professional life, just as I had done with Mr. Simpson.”

Ten such informational interviews led to four job interviews, which resulted in two job offers. Since September 2015, Comeau has been working in Montreal as associate analyst in institutional portfolio solutions at RBC PH&N Investment Counsel, where he advises portfolio managers on asset allocation.

“I get satisfaction out of helping the students”

The mentorship has benefits for the mentor as well as the mentee. “I get satisfaction out of helping the students,” says Simpson. “I’m pretty active in the investment business, but that still leaves me 15 to 20 hours a week to fill. This and my interest in philanthropy gives me another platform to do something worthwhile.”

Simpson is part of a growing community of alumni mentors and volunteers who reconnect with the University. This surge of alumni engagement is one of the great hallmarks of the Boundless campaign. Alumni participation has risen steadily throughout the campaign, giving students opportunities to learn from our experienced graduates, so that they can prepare for lifelong personal and career success.