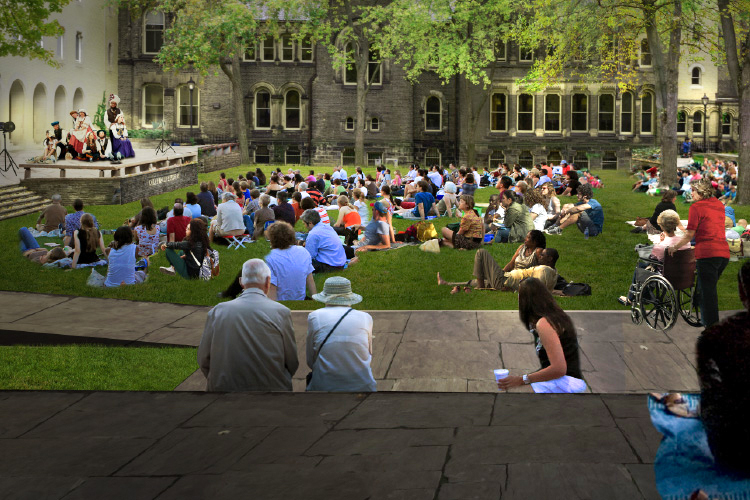 Revitalization is coming to one of University of Toronto’s oldest and most iconic buildings. Thanks to lead gifts from alumni Paul Cadario and Edmund and Frances Clark, University College will undergo large-scale renovations in 2018 with the aim of making a building that’s more than 150 years old more accessible and student-friendly.

“The goal of this revitalization is to recover the architectural identity of these historic interiors, and to create dynamic new settings for student life and learning for generations to come,” said U of T President Meric Gertler at an event to mark the beginning of construction.

The Clarks’ gift of $2.1 million is earmarked for improvements to the UC quad, which will be renamed the Clark Quadrangle. The couple, who come from a multi-generation family of UC alumni, earlier helped the launch the renovation project with a $2.5-million donation. Edmund is the former CEO of TD Bank Group.

The project was also funded by a $3-million donation by Paul Cadario, a U of T Engineering alumnus, former member of the Governing Council and a former manager at the World Bank, and by an increase in ancillary fees voted in by UC students.

“This project wouldn’t have been possible without the support of very generous alumni such as the Clarks and Paul Cadario and the many, many other alumni who have given gifts of varying sizes,” says Donald Ainslie, Principal of University College.

“The goal of this revitalization is to recover the architectural identity of UC’s historic interiors, and to create dynamic new settings for student life and learning for generations to come. This incredibly exciting new chapter in the UC story is thanks to our wonderfully generous supporters, especially the Clark family, Paul Cadario, and the students of University College,” says U of T President Meric Gertler.

Updates to the college are much needed, says Ainslie.

“The actual historic building … is not really serving our students now for the way 21st-century teaching and learning takes place because too many of the significant historic rooms sit empty during the day and students don’t have a reason to be there,” he says. “I think they’re missing out on a chance to experience not just U of T classes but the long history of U of T through University College.”

Renovations are expected to be completed by spring of 2019. The architects at the helm of the revitalization are John Shnier, a partner at Kohn Shnier Architects and an associate professor at the John H. Daniels Faculty of Architecture, Landscape, and Design, and Graeme Stewart, a principal at ERA Architects.

Ainslie and Shnier told us about some of the significant updates to University College.

The Clark Quadrangle: “It’s just a magical space for student activities,” says Ainslie. “By renovating it immediately after we finish the revitalization, we’ll be able to ensure it enables curricular and co-curricular activities even more successfully.” The Paul Cadario Conference Centre: The Croft Chapter House will be transformed into a conference centre. “As a conference centre, we’ll be bringing the research mission of the University into the building in a way it hasn’t been in decades,” says Ainslie.

Accessibility: “As charming and Harry Potter-ish as the building is, it’s also what makes it very challenging to access if you’re a user with any form of disability or need extra help with orientation,” says Shnier.

That’s why a big part of the revitalization project is improving accessibility across the building. This includes building a new elevator, accessible entrance at the front of the building, and replacing some stairs with ramps, Shnier says. “All it takes is a six-inch difference between floor levels and you’ve created an obstacle for someone,” he says. UC Library: The college’s library is moving back to its original home – from the Laidlaw wing back to the East Hall. A mezzanine will be built, referencing the design of the original library before it was destroyed by a fire in 1890.

“The library becomes a symbolic and practical key component of the revitalization because that it will immediately bring a desired use by students to the front of the building in a way that’s much more fundamental to what a university does,” says Shnier.

The Clark Reading Room: “I think that’s going to be a campus hotspot,” says Ainslie, about the West Hall room that will become an updated student space. A new café is also coming to UC in the attic of its central tower. A place to come together