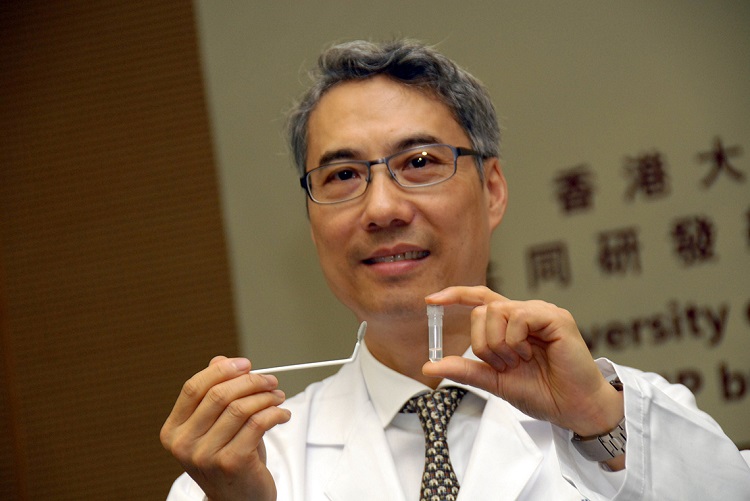 With his innovative head and neck cancer screening technique now close to being approved for worldwide use, Dr. Raymond Ng (PhD 1986, MD 1988) is reaching out to help others build their own ideas.

With a gift of $1.5 million, Dr. Ng and his partner recently created the Raymond Ng and Wendy Chui Foundation Fund for Innovation in Otolaryngology-Head & Neck Surgery at the University of Toronto. The fund supports students and faculty as they develop projects with commercialization potential.

He spoke with the U of T’s Faculty of Medicine about his commitment to advancing medicine through enterprise.

Along with Wendy Chui, you have created this innovation fund in otolaryngology to support invention and commercialization projects. Why did you decide to give back in this way?

A few years ago, I created two graduate awards at U of T’s department of otolaryngology-head & neck surgery, where I am an assistant professor. I would see these residents who are so smart and have such great ideas but who may not have expertise translating their work into real-world solutions. And I know how difficult that can be. A lot of people turn away because they struggle to get funding and don’t stick with their idea long enough to turn it into something valuable for everyday clinical use.

I’m so impressed with the projects these students developed that I wanted to help bring them to the next level. The idea for the fund is to kickstart great ideas – and to be a catalyst for change in medicine.

I’m not a philanthropist who has “made it” and is now reaping the rewards and giving back to the next generation. Instead, I feel I’ve learned so much about research and development, as well as the commercialization process, that I want to pass on some of this knowledge.

Not all projects are going to be successful. But it will never happen if you don’t try, so I want to encourage others to pursue and build their ideas into impact.

What made you work on developing an early screening technique for invasive cancer?

When I was doing my otolaryngology residency at U of T, we would see patients come in with late stage nasopharyngeal cancer – an invasive cancer that develops at the back of the nose, and is common among Asian and especially Chinese populations. Because its symptoms are similar to a common cold – often patients would feel congested or get nosebleeds – it can be hard to detect in early stages. When diagnosed at a late stage, the odds of treating it successfully are much lower than if it had been caught earlier.

I did my PhD in clinical biochemistry while doing my medical degree at U of T, so I had experience in laboratory research focused on the underlying mechanisms of cancer. Since there was a virus known to be strongly associated with nasopharyngeal cancer, I thought, “Wait a minute – this would be a good biomarker for screening and early detection.”

Were any tools being used to detect the cancer at the time?

There was no general screening tool available. The most common method was to examine the inside of the nose using an endoscope – a flexible tube with a camera on the end. If the results were highly suspicious, a biopsy would be performed. But the endoscopy isn’t very accurate, especially for early-stage cancer – and a biopsy is highly invasive and painful.

So I started contacting colleagues and brought together a group of experts, including a biomedical engineer, surgeons and venture capitalists. I devised a brush technique to collect samples through the mouth instead of the nose – one that isn’t too uncomfortable for the patient. I also developed a lab protocol that’s simple and highly accurate in detecting this virus from sample that doesn’t require refrigeration.

Is this screening device currently in use?

Good question. It’s such a complex process to turn an idea into a real-world solution – it’s got to be more than 10,000 steps. So even though it’s been over 25 years since my residency program, it was only in the last few years that we were able to launch a prototype and begin screening small groups of people in Toronto and Hong Kong. Called NP Screen, it’s now recognized by the U.S. Food and Drug Administration as being a “Laboratory Developed Test.” It’s the only screening test that exists for this type of cancer – and our results have shown to be 99 per cent sensitive and specific to picking up the cancer. And because it’s relatively simple and inexpensive to deploy, it was listed in the 2014 World Health Organization’s compendium of innovative health technologies for low-resource settings.

You’ve done so much in your career – spanning surgery, science and entrepreneurship. What stands out as the most meaningful for you?

I love the practice of surgery – the precision and fine detail involved. In otolaryngology, or head and neck surgery, it’s quite special to be able to focus on these very intricate areas, like the nose and neck for example. It’s also wonderful to help patients at every stage of life. Through my work in research and commercialization, however, it’s gratifying to know I can expand on treating patients at an individual level and truly help improve care and patient outcomes on a much larger scale.