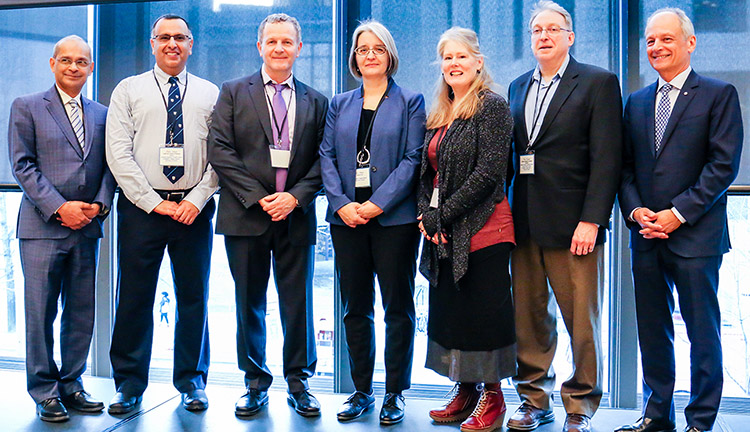 Seven scholars whose work has transformed everyday lives of people in Canada and around the world have a new accolade to add to their resumés – they’re winners of the inaugural University of Toronto President’s Impact Awards.

U of T President Meric Gertler told guests at the U of T Salutes! celebration of research excellence event, where they were honoured, that the new award celebrates faculty members whose research has had a major impact beyond academia or beyond a specific discipline.

Selected from “a very strong pool of candidates,” the recipients reflect a broad range of disciplines and impacts from health and education policies to the commercialization of new products.

“It’s lovely to have been recognized,” said Lisa Austin, a professor in the Faculty of Law whose research has had a visible impact on Canadian privacy law and policy.

I like to talk to people to find out what is concerning, what is puzzling

Austin is deeply connected with communities beyond the University. She regularly meets with people involved in the field of privacy – whether they be regulators or people in the corporate world – to gauge what needs to be done to protect people’s privacy in an increasingly digital world awash in personal information.

“I like to talk to people to find out what is concerning, what is puzzling, what are you worried about and why is it difficult for the law to help you? These discussions really enrich my understanding of the field and feed back into my research.”

That scholarship, cited by the Supreme Court of Canada and other courts in important decisions, has had a direct impact on the lives of her fellow Canadians – even though they’re unlikely to know her name.

“We created the President’s Impact Award to shine a light on U of T scholars who are taking their research out of the university and having a tremendous impact on society. This outstanding group of seven are affecting the lives of people across Canada and around the world with their research – and that should be celebrated,” said Vivek Goel, vice-president of research and innovation, whose office administers the competition.

In addition to Austin, the inaugural recipients of the President’s Impact Award are:

Laupacis also received the $2,000 Carolyn Tuohy Impact on Public Policy Award, presented annually under the banner of the U of T Awards of Excellence.

“I’m very proud to receive these two awards,” Laupacis said. “I am especially honoured to receive an award named after Carolyn Tuohy, a person whose work I’ve admired and someone I’ve had the pleasure of working with in the past.”

Laupacis, who is chair of Health Quality Ontario, is a researcher with expertise in conducting studies to assess the benefits and harms of tests and treatments. He’s advised health ministries in Canada about which tests and treatments should be paid for by the publicly funded health-care system.

In 2011, he also launched healthydebate.ca, a website dedicated to educating the public about the health-care system, promoting debate and affecting health policy decisions.

I analyze problems cynically but I act optimistically. What gives me optimism are the amazing students I work with at U of T

“The biggest joys I’ve gotten out of research over the last 30-plus years is the recruitment and mentoring of younger researchers,” said Laupacis. “It’s a great multiplying effect when you mentor people. And, from a selfish point of view, I learn a lot from them. They are at the most innovative point of their careers, and they teach me things every day.”

Austin agreed: “A friend once told me I analyze problems cynically but I act optimistically. What gives me optimism are the amazing students I work with at U of T.”

Do you know of research impact leaders worthy of recognition? This spring, submissions will be accepted for the 2018 President’s Impact Awards. For application deadlines, as well as more information, visit www.research.utoronto.ca/PIA/.