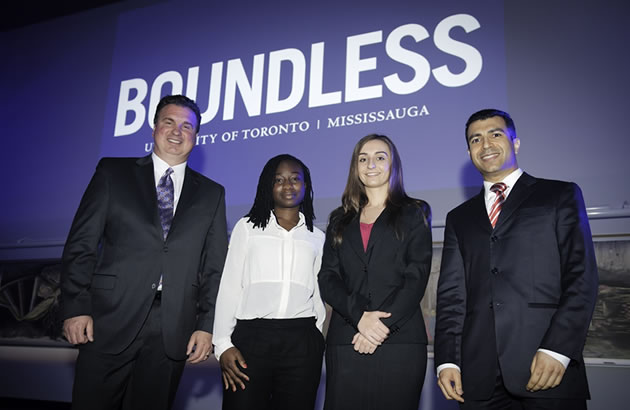 More than 325 members of the U of T Mississauga community gathered on May 23, 2012 in the Instructional Centre to celebrate the public launch of the campus’ $60-million fundraising campaign.

On stage, chalkboards were covered in original artwork—illustrating the theme of “boundless”—created by Laura Biggs and Daniel Deus, two award-winning U of T Mississauga art and art history students. All music for the program was performed by students from U of T’s Faculty of Music, and among the opening speakers were two U of T Mississauga student leaders: undergraduate Marijana Josifovska, the founder of Investors Beyond Borders, and PhD student and youth advocate, Eugenia Duodu.

“I am one person, but my impact can be global,” said Duodu, echoing the theme of the evening’s celebration.

Community leaders, campaign volunteers, donors, students, faculty, staff and alumni attended the ceremony, which paid tribute to U of T Mississauga’s remarkable 45-year history, its deep roots within the community and its bold plan to take the next leap forward as a global innovation leader.

Hazel McCallion, Mayor of Mississauga, kicked off the program, remarking that she has worked with every U of T Mississauga principal since the campus’ founding. “We are very fortunate to have such a community-focused, innovative university in our midst, helping to power our economic engine and educate our young people,” Mayor McCallion said.

Deep Saini, U of T Vice-President and Principal of U of T Mississauga, took the podium to highlight the campaign’s priorities: to seek visionary private-sector funding to increase scholarships, student mentoring programs, unique learning environments, faculty chairs and professorships—and to launch two bold initiatives, the Centre for South Asian Engagement, which will broaden the study of traditional subjects by engaging the community’s South Asian diaspora, and the Institute for Management and Innovation, the cornerstone of the campaign, which will provide the leadership needed “to foster the intellectual strength to create an innovation culture for our nation.”

“U of T Mississauga is at a turning point in its evolution,” Professor Saini continued. “We are entering an era defined by transformative growth, social impact, community engagement and boundless potential.” He was quick to point out, though, that U of T Mississauga would retain its special “people vibe,” fostered by a collegial, close-knit environment in which “students can grow, flourish and spread their wings.”

U of T’s Vice-President of Advancement, David Palmer, announced that U of T Mississauga has already raised more than half its $60-million goal. He applauded honorary campaign co-chairs William G. Davis and Ignat Kaneff for their extraordinary leadership, and he recognized philanthropists Terrence Donnelly and Carlo Fidani for their visionary generosity, which has fueled the Mississauga Academy of Medicine and the Terrence Donnelly Health Sciences Complex. Palmer noted that the Donnelly Complex has just been honoured with a 2012 Governor General’s Gold Medal for Architecture.

Palmer also recognized entrepreneur Vasu Chanchlani for his catalytic gift of $2 million to the new Centre for South Asian Engagement, as well as Amgen Canada for their generous $425,000 donation to create a fellowship in biotechnology and a professorship in health system strategy.

U of T Chancellor David Peterson concluded the program, remarking that U of T Mississauga’s phenomenal growth has been “a joy to behold.”

The campaign for U of T Mississauga is an integral part of U of T’s $2-billion Boundless campaign, which was publicly launched in November 2011 and which surpassed the $1-billion mark in January 2012. Through the Boundless campaign, U of T seeks to address the pressing global challenges that affect us all, by preparing global leaders who have the skills to work across borders, boundaries and disciplines.

Student leader Marijana Josifovska exemplified this boundless aspiration in her opening remarks at the May 23 event: “At U of T Mississauga, I’ve learned there is no dream too big and no vision that’s unreachable.”

Read more about the campaign for U of T Mississauga.