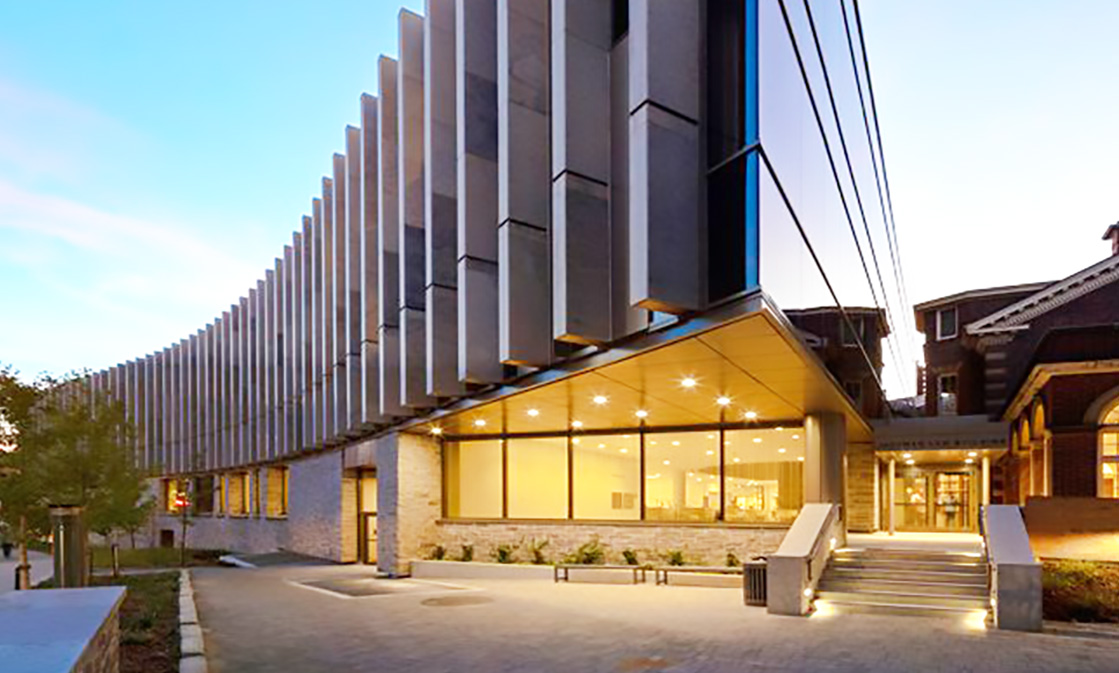 Capital projects are more than just bricks and mortar. They are the crucibles in which research, discovery and teaching take shape, where innovation and creativity are grown, and where students brainstorm, collaborate, study and learn. Our community of donors have recognized that in order for the University of Toronto to move into the future, students and faculty need state-of-the-art studios, labs, classrooms and other spaces that are outfitted with the newest technologies, the latest tools and flexibility that inspire the ideas that fuel innovation.

The following are just some of the capital projects that have been completed or are underway as a result of the Boundless campaign:

Varsity Centre and the Goldring Centre for High Performance Sport Varsity Centre–which includes a 5,000-seat stadium, 400-metre eight-lane track, state-of-the-art artificial turf field with a dome for winter use, and 4,000-seat arena–is home to international, intercollegiate and intramural competitions throughout the year.

The Centre houses the Goldring Centre for High Performance Sport. Supported by a lead donation of $11 million from the Goldring family and $10 million from graduate Ron Kimel (BA 1966 UC) and his family, whose gift created the field house, the Centre fills a critical gap in Ontario’s high performance sport infrastructure. It is a facility like no other in the province, fostering synergies between sport science research and teaching, sport medicine, athlete training, coaching and world-class competition. A generous $18 million gift from the late Russell Morrison (MA 1947, Hon LLD 2004) and Katherine Morrison (PhD 1979, Hon LLD 2004) to the Robarts Common capitalizes on their previous gifts of $5.6 million to the Morrison Pavilion at Gerstein Library, $6 million to Morrison Hall at University College, and $10 million to Robarts Library in 2008—at the time the largest private donation ever made for the renewal of a library in Canada. This most recent landmark gift to Robarts will add 1,222 new study spaces to the library, building on the 1,412 new study spaces the Morrisons helped to create at Gerstein. Robarts Common is the signature project of the Robarts Library renewal, a five-storey structure that will bring study spaces at Robarts to more than 6,000 and create a more inviting, accessible and productive environment for the 18,000 students, faculty and alumni who visit the library daily. The Krembil Foundation provided $1 million to create the Krembil Student Commons in Highland Hall, an innovative new space that aims to give University of Toronto students a strong sense of community and social engagement through unique, state-of-the-art open study spaces, enclosed quiet areas, flexible “collaboration zones” that can be adapted for individual or team work, as well as casual lounge seating for up to 400 students. The Krembil Student Commons will be an integral part of the new Highland Hall, a centre of excellence for leading-edge research, teaching and community engagement in the social sciences, particularly related to the study of suburbs, migration and globalization. A generous $2.5 million donation from Ed Clark (BA 1969 UC, Hon. LLD 2012) and Fran Clark (BA 1969 UC, MA 1990, PhD 2002) will help restore University College’s iconic West Hall. This impressive interior has played a central role in Convocation for thousands of graduating students as an assembly space for donning cap and gown. It has also served as an exhibition space for the collections of the Royal Ontario Museum. Another major renovation to University College is the planned Paul Cadario Conference Centre at Croft Chapter House, made possible by a $3-million donation by Paul Cadario (BASc 1973, Hon. LLD 2013). The donation will transform the iconic space into an accessible, full-service conference centre with state-of-the art lighting and audiovisual features, and will host University, national, and international symposia. The Goldring Student Centre opened in 2013, providing a vital space for student activity at Victoria University with space for meeting rooms, offices for student government and clubs, a renovated café, two-storey lounge, assembly space and lockers for commuter students. The Centre was named in honour of the Goldring family–siblings Blake (BA 1981 VIC) and Judy (BA 1988 VIC) and the late Warren Goldring, a U of T philanthropist, volunteer and alumnus who initiated support for the project. The Goldrings provided $4 million to launch the renovation. The Centre also received generous support from Victoria’s Chancellor, Wendy Cecil (BA 1971 VIC) who gave $1-million to the project. Vic students committed $7 million, while alumni contributed almost $9 million more. The heart of cinema studies at U of T has been revitalized as part of the Boundless campaign. Supported by a lead gift from celebrated television producer Linda Schuyler (BA 1974 Innis, Hon. LLD 2016), renovations brought the facility up to modern standards and have allowed it to meet the high demand for public and academic programming.

TRANSFORMING OUR FACILITIES, CENTRES AND INSTITUTES

The Munk School of Global Affairs Reflecting its growing influence, the Munk School of Global Affairs expanded to an additional location in a heritage building at 315 Bloor Street West in 2010. The federal and provincial governments provided funds to support the building which enabled the school to expand its programming. The program expansion was made possible by a gift from Peter Munk (BASc 1952, Hon. LLD 1995, Hon. DSL 2004 TRIN) and Melanie Munk (Hon. DSL 2004 TRIN). Elegantly clad in sandstone, the building was once home to one of the earliest national observatories. Now it has become a centre for cutting-edge research to help Canadians navigate the global issues that affect our lives—from innovation policy to cybersecurity to the role of global cities. Named after its lead donor, the Hon. Henry N.R. Jackman (BA 1953 VIC, JD 1956, Hon. LLD 1993, Hon. DHL 2011 VIC), the Jackman Law Building opened its doors in 2016. Overlooking Queen’s Park Crescent and Philosopher’s Walk, the spectacular multi-storey addition has doubled the law school’s teaching and learning space. The Bora Law Laskin Law Library and historic Flavelle House were also renovated extensively as part of the project. Mr. Jackman’s donation of $11 million to the school is the largest in the law school’s history. More than $33 million was raised in support of the building, including several generous gifts from the law alumni and the legal community. The Rotman School of Management’s landmark expansion was made possible by generous donations from alumni and friends, including its lead donors, Joseph L. Rotman and Sandra Rotman, and Marcel Desautels, as well as critical investments by the province of Ontario. The new space has doubled the school’s teaching, research, study, presentation and special event space, and is providing the platform for the Rotman School’s ambitions to redesign business education for the 21st century.

The Centre for Engineering Innovation and Entrepreneurship Opening in 2017, the Centre for Engineering Innovation & Entrepreneurship will serve as the Faculty of Applied Science & Engineering’s primary vehicle for collaborative learning and interdisciplinary research. The building will feature interactive spaces for learning and design, as well as a number of multidisciplinary research centres and institutes–all thanks to generous support from alumni, students and friends totaling more than $26 million. The Terrence Donnelly Health Sciences Complex is home to the Mississauga Academy of Medicine, a partnership between U of T Mississauga, U of T’s Faculty of Medicine and Trillium Health Partners aimed at addressing the critical shortage of physicians and other health professionals in Ontario. The new complex, made possible by transformative gifts of $12 million from Terrence Donnelly and $10 million from the FDC Foundation, along with $30.3 million from the province of Ontario, is providing world-class educational and laboratory facilities for students and researchers. Of the combined $22 million from Terrence Donnelly and the FDC Foundation, $12.7 million was committed to capital costs with the remainder designated to a Chair in Family and Community Medicine as well as scholarships and bursaries. The Innovation Complex at U of T Mississauga houses the Institute for Management and Innovation, a new business school training leaders for the health-care, biotechnology, professional accounting and environmental sustainability sectors. The Institute, which will receive $10 million in support from the City of Mississauga over the next decade, will help drive innovation and economic development in the Peel region.

The John H. Daniels Faculty of Architecture, Landscape, and Design

Originally the home of Knox College Theological Seminary and later the Connaught Laboratories, which introduced insulin to the world, One Spadina Crescent, the new home of the John H. Daniels Faculty of Architecture, Landscape, and Design, is one of Toronto’s architectural masterpieces–a historic building occupying an iconic circle within a city dominated by the mercantile grid. The building, scheduled to open in early 2017, has received substantial support from the University and lead donors including two generous gifts totalling $24 million from John H. Daniels (BArch 1950, Hon. LLD 2011) and his wife Myrna Daniels. Of that amount, $19 million was earmarked for the building. To date, more than $26 million has been raised by alumni and friends, including a $1 million gift from the Daniels Corporation, evenly divided between capital and The John and Myrna Daniels Scholars award program.

BROWSE ALL NEWS
Reimagining a landmark: One Spadina Crescent will create a collaborative hub for a better Toronto
MORE NEWS

Enhancing international education with U of T scholarships